As a software engineer working in the San Francisco Bay Area, I get a lot of unsolicited recruiting emails. I recently decided to dig through my email archives and do some analysis of the long-term trends. Here are the results.

I get career-related messages sent to both my LinkedIn and Gmail accounts. Here’s a typical example (with the sender’s name blacked out for privacy): 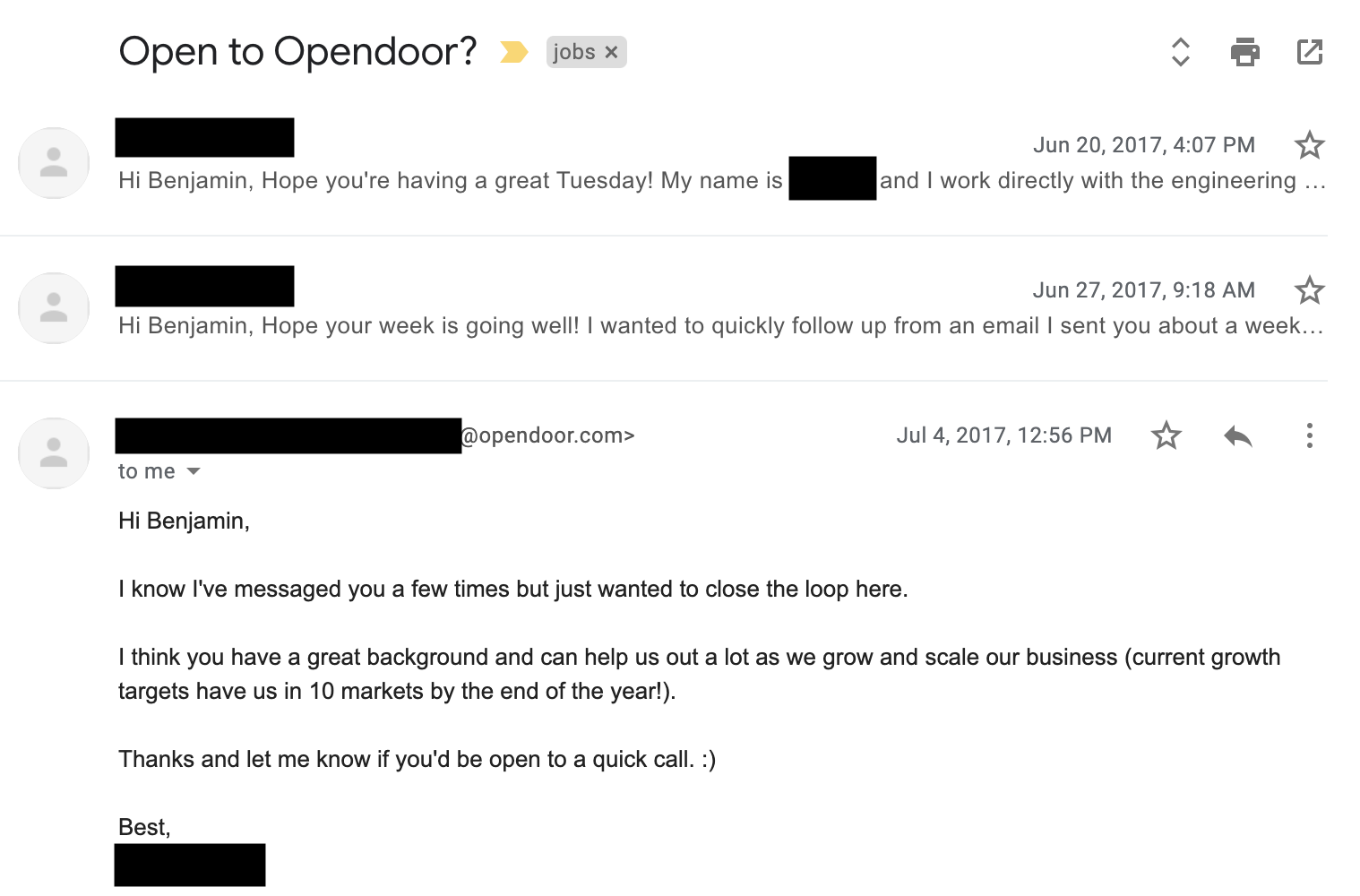 The first step was to get all these messages out of my accounts and into a format that I could use for the analysis.

For LinkedIn, this was easy- there’s a “Get a copy of your data” section in the account privacy settings. I selected “Messages”, clicked the “Request Archive” button and then, a few minutes later, downloaded a CSV that contained one row per message, with columns for all of the important metadata: sender, recipient, subject, date, etc.

For Gmail, the process was a bit more involved. I had to go through Google’s general export product, Takeout, scroll down the Gmail section, then select the labels to export. Thankfully, I’ve done a good job labelling all of my career related emails, so I could just export those and not everything in my account.

The file had several million lines that looked like this:

I then wrote a Python script to read this file, pull out the inbound messages, and convert each one to a <from,subject,date,body> tuple. Thankfully, the Python standard library contains a mailbox module that parses mbox files and makes it easy to pull out the sender, recipient, subject, and date for each message. Getting the bodies was a little trickier since mbox bodies can have multiple parts, each with a different encoding (text, html, etc.), but I managed to find some examples on Stack Overflow to copy.

I then merged the Gmail data with the LinkedIn data, exported everything to a CSV, and opened this in Google Sheets. Finally, I spent an hour going through all the messages and deleting the ones that weren’t unsolicited. The result was a clean spreadsheet with one row per recruiting email that I could use for my analysis.

The following shows the number of unsolicited recruiter emails I’ve received by month since the beginning of 2014:

Volume has increased a lot over the years

Back in 2014, I was only getting a handful of messages per month. Now, I routinely get more than one a day. The fact that I have more experience now than I did earlier in my career is certainly a factor. But, I think the key driver here is simply that tech keeps getting bigger and bigger, and the need for skilled engineers has increased significantly over time.

There are clear seasonal patterns

Email volume goes down significantly around the winter holidays. There’s also a smaller drop in the middle of the summer. Spring and fall are the busiest times, which also matches when companies do the most interviewing.

The peaks in 2015, 2017, and 2019 correspond to periods when I was actively on the job market. During these times, I was much more active about updating my LinkedIn profile, which is probably a strong signal that a candidate is looking for something new. It’s also possible that word spread through recruiters or friends, and that led to more job solicitations.

There was no significant drop due to COVID

Despite many companies laying people off or implementing hiring freezes earlier this year, I still got a lot of recruiter emails. Now that startup valuations are back up and companies are hiring again, I’m getting more emails than ever.

Facebook has by far been the peskiest of all the companies over the years, sending me more than 25 unsolicited recruiting emails since 2014. They’ve also sent a few text messages to my phone, which is super-annoying. I should note, though, that I did interview there back in 2012, so I’m probably in their system as a past prospect, which makes me a more likely sourcing target.

Amazon has also sent a lot of emails, particularly over the last two years.

Interestingly, I’ve only gotten one email from Apple, and nothing from other tech giants like Microsoft, Netflix, IBM, SAP, and Cisco.

A very common pattern is to send a message, then send a few follow-ups over the next few days with slightly different bodies and subject lines. See the Opendoor example at the beginning of this post for an example.

I guess that’s one way to make sure that an email isn’t missed, although it can get a little tiresome if you’re not interested in the company at all.

Recruiters and sourcers try to be clever with subject lines and message introductions to catch your attention and make the messages seem more personal.

Binary is one way to get attention, but I have no idea what it says since I’m not a computer :-):

Another trick is to put your current and past employers in the subject so that it looks more personalized, and then reference them in the body. Not sure how effective it is, though:

Emoji are cute. Here’s a message that had one in the subject and then used them liberally in the body: 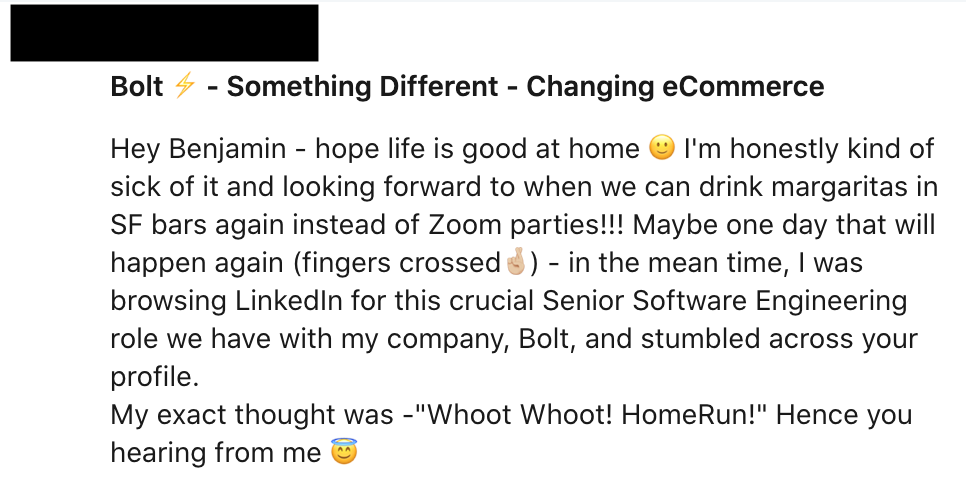 I’ve gotten a lot of recruiting emails over the years, and, assuming that current trends continue, will get a lot more in the future. Despite these messages being unsolicited, I don’t consider them “spam” and actually like reading them. The vast majority are polite, informative, and well-written. Even if I’m not actively looking for a new job, it’s nice to learn about what’s out there so I know where to apply the next time I’m on the market.